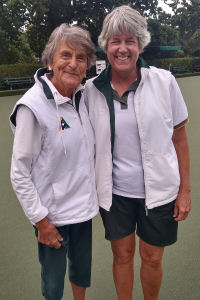 Congratulations to all winners in the 2020/21 Club Championships. Participants contended for honours in triples, pairs or singles with most being open entry, a few being restricted entry and one being handicapped. Well done to our new Club Champion, Rob H, and our five time Ladies’ Champion, Margot. Honours in the Club Pairs went to Sue G and Ross, while the Ladies’ Pairs was won by Margot and Carole (pictured) and the Mixed Pairs by Mark S and Carole. The Club Triples was won by Carole, Lambis and Tim. Graham won the President’s Handicap, Lindsay Ch won both the Ladies’ Proportional and the Club Novice while Rob F won the Club Minor. So you’ll see it’s hats off to Carole who featured in three wins while Rob H, Margot and Lindsay Ch each featured in two. Conversely, well done to those players who actually managed to win without assistance from the winningest four!

With Covid-19 restrictions easing we anticipate being able to kick off this season's Club Championships from Monday November 16. Sign-up sheets and the Conditions of Play have been posted on the noticeboard.

Club Championships are open to Bowls Members and Life Members with additional restrictions for specific championships such as Ladies, Minor and Novice. The entry fee is $5 per player per championship and the closing date for entries is Friday November 13 - barring any further pandemic setbacks.

Most of us are missing our bowling but spare a thought for those whose season highlight is the dramatic presentation of the Most Valuable Player award. Due to the virus lockdown, Presentation Night was not held and there was no nailbiting anticipation as the presenter declared "with just 6 rounds to go the race for most valuable player looked like this ... then came unlucky round 13 and our erstwhile leader was panned by rinkmates and opponents alike ...".

But wait! there's a 2020 Presentation Night Report for all of us to digest in the safety of our own homes. True you'll not be able to relive the tense drama of the contest for most valuable player but there are a couple of player ranking tables based on the match 'exit polls'. Other sections of the report, which are arguably more concrete, sum up both the club's winter and summer pennant performances while the final section contains a roll call of those who have triumphed in this season's Club Championships. Enjoy!

Congratulations to all of this year's Champions and Runners-Up, as shown in the table below, and especially to Ben Mantynen, Club Champion and Kylie Murphy, Ladies' Champion.

Our resources page links to a list of open and ladies' champions dating back to the 19th century as well as a list of all singles and pairs champions since 2000.

This year we have an opportunity to support two club members in the final eight of the Sandbelt Ladies' Champion of Champions competition. These quarter finals will take place at 9:00am on Sunday Feb 16 at Hampton Bowls Club. Both Kylie Murphy, our Ladies' Champion, and Heather Brodie, Ladies' Champion at RMGC but a dual member at our club, have reached the quarter final stage. Unfortunately the opportunity to support both players will be somewhat limited as they are playing each other! That does mean, however, that one of them will still be competing at the semi-final stage, which is scheduled for 12:00 noon at the same venue. Congratulations to both for their success so far. 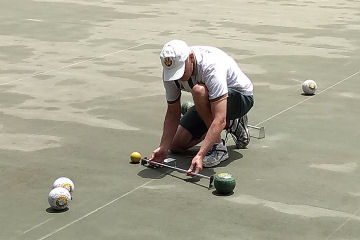 You know it's a close measure between two bowls when the marker can't call it, the players can't agree it and a string measure can't determine it. This was what happened on the very last end of this year's Ladies' Singles Championship final. Sal Rayner clearly had shot but needed two for the win, while Chris Greenhatch was hoping that she held second shot in order to keep her hopes of a comeback alive. After a couple of unsuccessful attempts by the marker to measure for second shot the umpire was called. He duly arrived at the head with trammel and calipers in hand. After much careful positioning and adjustment of the measurement tools the spectators' patience was rewarded - the closer bowl was indicated and it was Sal's. We therefore congratulate her on becoming this year's Ladies' Singles Champion. 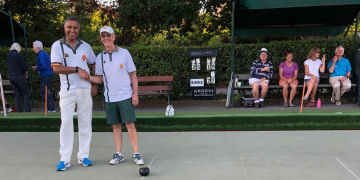 This year's Club Singles Championship saw a final of the highest quality played between Wayne Gill and Athi Singh. Spectators were treated to an entertaining and hard fought contest of high quality draw bowling. The win could easily have gone either way up until the very last end. Congratulations, however, go to Wayne Gill, our new Club Champion, who finally prevailed after a gripping 27 ends.

It's that time of the year again, when the Stellar Victorian Open causes a hiatus in pennant competition. Many members take the opportunity to enjoy a break but three of our members joined over 1800 other bowlers in entering the Vic Open, playing in both singles and pairs. Well done particularly to Jimmy on his fine run in the singles against top class opponents. He won both his sectional matches, one subsequent knockout match and was close in losing the match to determine who would progress to the last 64. 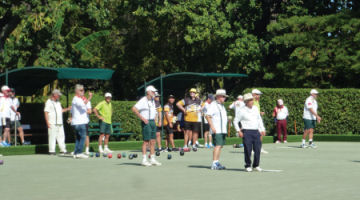 On Sunday 8th April the club hosted teams from several neighbouring clubs to participate in our longstanding invitational tournament, which was recently renamed the Rob Fairweather Invitational Fours. Once more the club excelled in its organization thanks to the efforts of numerous volunteers who ensured that the day ran smoothly. After 24 ends of highly competitive bowling the winning team turned out to be one of our own - congratulations to Sue, Norman, Bede and Wayne on their fine win. 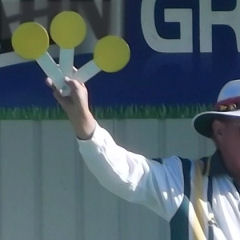 Sunday saw a host of eager bowlers descend on the club for the opening round of the Sandbelt Men's Singles. The club's sole competitive representative was Terry who acquitted himself very well but succumbed to world class opposition in his second match. Equally notable though was the fine job done by the club's volunteer markers, expertly guided by event organizer Wayne. This was something a little different from their usual lawn bowls experience. There's a markers' manual of course, wouldn't you know it, but more importantly a set of basic principles that a good marker will be mindful of. Apparently our volunteers adhered well to those principles and appreciation for a job well done was expressed by a number of players. Overall this was a successful, well-managed event and no doubt the club will be happy to welcome competitors back next year with a number of slightly more experienced markers ready to play their part.