Freedom is back! and pennant is back! Fling off your face masks and leap onto the green! Okay don't leap - there are still some rules, like those protecting our playing surface. Hats off to Bowls Victoria who have configured the compacted season at short notice and to our midweek selectors who have already posted the teams for this Thursday's 7-a-side match. Links to the results / ladders on Bowlslink for all the sections in which our sides compete can be found on the Competitions page. Good luck to all members competing this season - let's make it memorable for the best of bowling reasons. 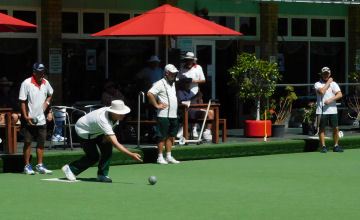 On Tuesday a cadre of supporters arrived at Elsternwick Park to barrack for our midweek second side as they sought to win promotion to division 2. Sadly, despite the much appreciated support, our side was unable to replicate their previous week's result against the same opponents at the same venue. A determined home side pulled away after the break and secured a comfortable win. This ends our only shot at glory in either pennant competition this season. We will need to regroup and reapply ourselves in preparation for the 2018/19 season.

Sadly our midweek pennant 2nd side fell 5 shots short in their semi-final against a strong Armadale 4th side. The day, however, will be forever memorable due to the application of the BV heat policy. APBC 2 fell behind early but rallied a little to stay in touch as the final ends approached. Then with one rink finished and just 3 ends left to play someone noted that the temperature had risen to 37 degrees, bringing the BV heat policy into effect. Now, during sectional play the worst case scenario can have teams waiting around for a couple of hours if the temperature looks likely to fall back below 36 degrees and they don't wish to declare a draw. However, in finals play a draw is not permitted and teams may wait until darkness if they are reluctant to reconvene the following day. In this instance play finally resumed at 7:20pm, just half an hour before sunset.

At this point APBC 2 needed to make up 8 shots to draw and force a one end playoff by all three rinks. Rink 1 had two ends remaining and Albert Park managed to score +3 on the first. On rink 3 Armadale snatched +1 from a -4 position with a fine draw shot. This left Albert Park needing to score +6 on the final end and remarkably they were actually holding +6 with just one (opposition) bowl to come. It was a pressure shot in fading light, which had to finish within 1m of the jack to avoid a draw and deciding ends. Much to Armadale's joy the shot was made and Albert Park scored just +1 on the final end. It was a disappointing result but a fittingly tense finale after about 10 hours spent at the club!

Last Tuesday APBC 2 fought hard for the one rink win that ensured a home semi-final. So on Tuesday, March 8 we will host Armadale 4 in a semi-final match from which the winner will gain promotion to Division 2. Success in that match would also see our side advance to the final, which will be held at Caulfield Park Alma on Thursday, March 10. The winner of that final will secure the section pennant.
Our Saturday Pennant 2nd Side have now matched their Midweek Pennant counterparts in securing a finals spot. On Highett's new high quality TifDwarf green our side, weakened by trickle-down absences, encountered stiff opposition, losing two rinks and drawing a third. Nevertheless the losses were kept moderate and thanks to a fine win by our fourth rink an important overall win was secured. APBC 2 cannot now be caught by the club sitting 5th and have therefore secured a finals place. In addition, our main rivals for 2nd spot lost and dropped 14 points this week. Consequently an 18 point home win next week would see APBC 2 very well placed to secure a home green semi-final.
Congratulations to our Midweek Pennant Second Side who, following a fine win on Sandringham's ultra-fast synthetic green, have now secured a place in the post-sectional finals. The clubs sitting in 4th and 5th places play each other in the last round and so cannot, mathematically, both overhaul our side. Ironically we would have preferred both those clubs to win this week to assist our bid for a home ground semi-final - that will now likely be determined by our last match, an away game against strong rivals Hampton Park. Meanwhile two of our Saturday Pennant teams are close to securing a finals place. The Firsts will take a huge step toward this if they defeat fellow contenders Middle Park on their green this Saturday. The Seconds are even better placed and will secure a finals place with a 12 point win or better this weekend. Of course they will be aiming for 18 points to help secure a home ground semi-final despite their main rivals each having a game in hand.
Tomorrow's (Dec 19) pennant matches are now officially cancelled. A bit of relief for those wary of the heat and more time to relax before our Breakup Party that evening.
Several important sign-up sheets have recently appeared on the noticeboard in the clubhouse. New members should note that the noticeboard, to your right as you enter the clubhouse, is the primary place to sign up for events and competitions. This is rarely possible by email and as yet never through the website. Although you should be advised of new opportunities via the Albert Parkers, and occasionally via the website, you will nevertheless do well to get into the habit of checking the noticeboard each time you visit the Club. So what has appeared there recently? Firstly with both Midweek and Saturday Pennant competitions about to start, two important sheets have appeared for both. First is the opportunity to sign up for these competitions, for which full and junior members are eligible. Most who are interested have already signed up but it is never too late. The second Pennant related sheets are those indicating unavailability. Ideally all participants are available for all 18 rounds of Pennant but realistically there are going to be absences and it is vital to make the selectors aware of any known absences as far ahead as possible. Secondly you will now find sign-up sheets for our Club Tournaments, also open to full and junior members. These include a diverse range of formats such as singles, pairs and triples. New members who have been enjoying early success with their bowling might like to consider signing up for either the Men's or Ladies' Minor Championships.